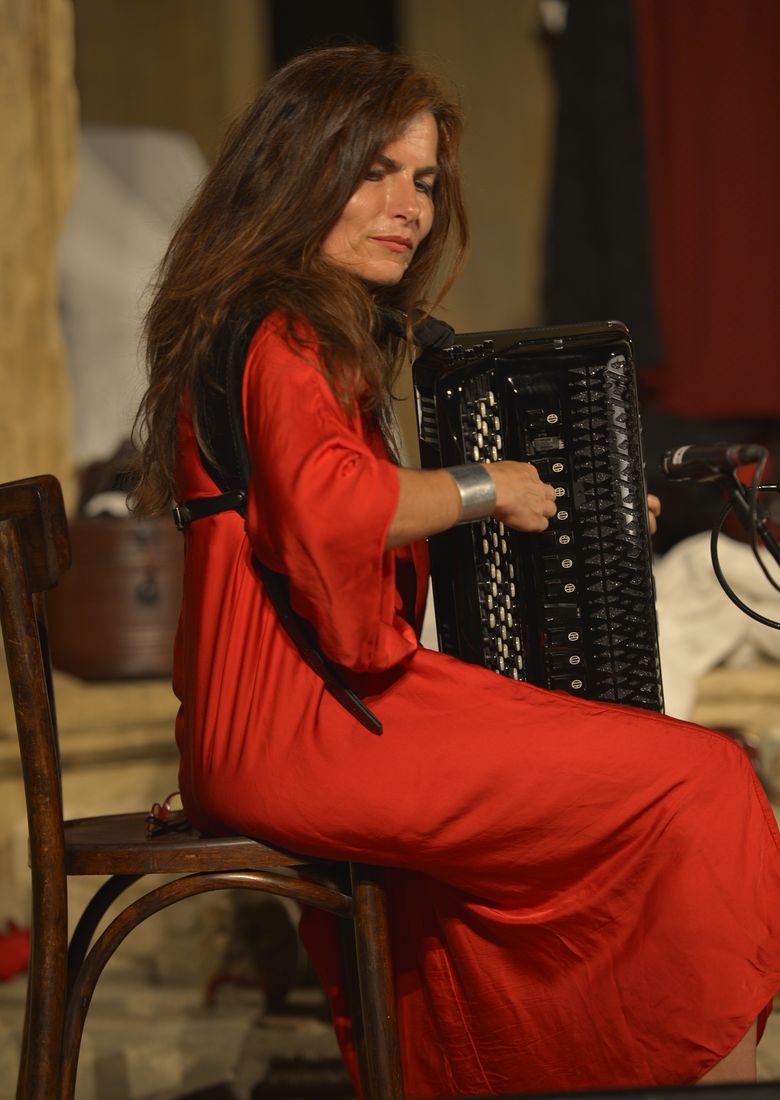 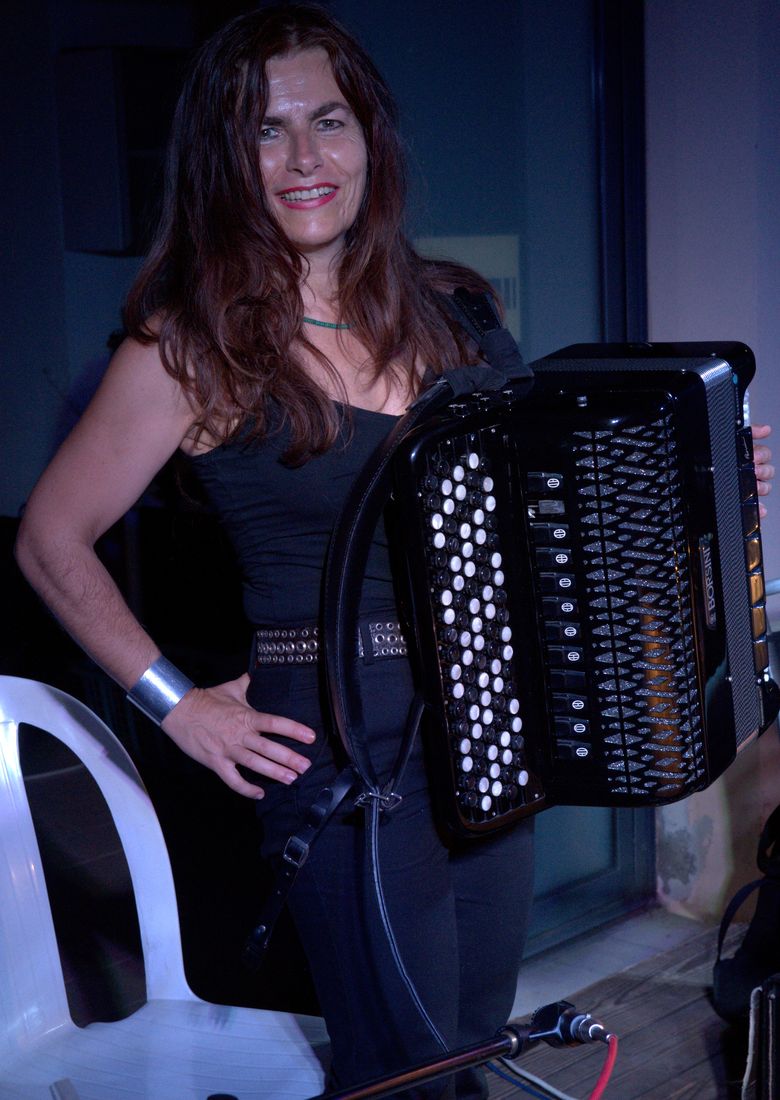 Il Coraggio” (The Courage): an important title for the last album by Miranda Cortes released a few days ago by the label Radicimusic Records; a work with a strong identity, as revealed by the presentation of the author: "I have reached the threshold of a time that asks me to take out of me everything I have learned, listened, played and digested. I have always loved to write in silence poetry and music; I waited to be pregnant with dreamlike intuitions and polychrome sound visions and this feeling arrived in a decisive way in 2020.

This is my solo work from A to Z. Starring the Accordion, guests the cello, violin, viola, electric guitar and electronics.

My composition includes years of studies and research, this work is a synthesis and the innovation of my experiences from classical music to new music, from rock to live electronics, from tango to combat folk, from the heterogeneous and precious traditions of the Mediterranean to french music as the songwriter Jacques Brel".

Can you tell us about your last record work? First of all, what led you to this solo creation?

Fourty years playing music in my heart and my mind! Many of my writings remained in the desk drawer, other things were published in previous albums depending on the collaborations in progress. For example, Aquarium Venitien on the CD 'Ndar' with a special guest, Gianni Coscia, was a great opportunity for my music and for me. In the same disc I published Hypermarché - La nuit du Redentor, Marcelle B. dedicated to my mother. Other songs such as Muzar and L'oubli et le Papillon composed in four hand with Rachel, basically reflect my poetic and my musical vision. For years I was thinking of a project on my own and in 2020 it came with force, a year of border, a year of deep introspection in which I decided firmly to describe my parallel world.  I materialize my imagination in sound, creating compositions in which being a musician becomes a single dimension with poetry, painting, dance, something in continuous movement in front of me. A walk, a prayer, a journey, a meeting, a memory are moments of everyday life, but first of all, there is my admiration for an incomparable artistic masterpiece: the Creation. I chose a strong title for this last album, Il Coraggio, because I think it is an inexorable principle of life with which we have to deal every day. The Courage to love unconditionally, courage to be, courage to face the great questions of existence and the storms of our inner oceans. It was not easy to complete the whole recording phase in the studio, the "health" restrictions certainly did not help musicians hosted in some tracks. And by the way I present them: the cellist Emanuele Praticelli of Padua; two amazing companions of many musical trips, Michele Pucci and Michele Sguotti of La Frontera quartet, Together we worked intensely on the research and study of the traditional music of the Mediterranean; the composer Simone Faliva, with whom I shared the song La Terre et le Ciel, an avanguarde piece with voice, accordion and electronics.

Any details about the CD and the songs you wrote?

There are nine track like September, my month. The cover of the CD is wonderful, I was looking for a portrait of floral beauties and the photographer, Mario Lunetti, proposed me something magic, splendid red poppies of the field in a dark grey background. I often look at these delicate little flowers, they could be wiped out in a moment, but their firm roots in the ground show all their strength and courage. I also look at human beings, which I cannot define differently than a shadow, too often shine for their wickedness and our future appears uncertain. Each composition has beauty and uncertainty, each one reflecting light and shadow. Sempre and La Terre et le Ciel, which open and close the album, represent the beginning and the end of my poetic and both play the same musical refrain. My accordion is the protagonist in Sempre, for its enormous expressive power, which contains within itself the source of life: the Breath. La Terre et le Ciel, with electronic experimentation, is inspired by my study of contemporary music, an aspect that also transpires in other tracks of the album such as Cortango and il Treno, like the individual search in life steps. Prière dans la nuit for voice and string quartet tells my night walks in my city,Venice, from Rio Marin to San Marco. I contemplate the time that here stopped and my thought becomes prayer. Le diable ça va is a tribute to the singer-songwriter Jacques Brel, a reworking of his first success, which, after seventy years, perfectly describes our present time, and then Valse Lunaire, Promenade, Le Tarn...

How much is important the place where you lived in your writings and composing?

I could say THE places... France, where I grew up, because of its multiculturality, living since early childhood with Africans, Indians, Maghreb, Italians, Portuguese fellows, the sound of their language, going to the market and finding their music and tapes (now relics) that I regularly bought... So many sound worlds in my head. The plateau of Asiago in Italy, a little mountain house 1057 meters high, the silence, the snow, the short and windy summer, the incomparable beauty of nature and the encounter with its Creator. That place where I lived allowed me to have an extraordinary panoramic view, when the wind brushed the air well, I could see the water horizon of the Venetian lagoon. Venice, wonder you never stop contemplating. I am always surprised by the human ability to know how to build magnificence with their own hands, but it does not end here: the lagoon mirror in which Venice stays is spectacular, so many colours, reflections continuously different capture eyes, the mind and the spirit. I always contemplate the weak boundary between water and sky, a line of contact towards the Ineffable. I confess that Mario Lunetti photos' in the promo video, and in my CD clearly evoke the Venetian spell and, in general, the miracle of Creation. These places are cornerstones of creativity in my music writing.

Can you describe your relation with accordion?

A happy relationship! It is my dress, but I confess that sometimes the anger takes over, especially for travelling outside Venice, not having the car outside home makes the difference... Seriously, the relationship has always been smooth, I love playing the accordion since I was a child and I have always done it with great facility from the years of training onwards. It makes me smile the colourful memory of the various instruments that I have embraced over the years: the first one, a Fratelli Crosio, beautiful silver sequins, the second a blue Lucchini, then for my classical studies a black Zerosette replaced by a black Borsini. In the meanwhile, a gift from my brother, a red Zerosette with a light veil of sequins, and then a small black Todaro with single notes. I recognize that the classical accordion offers many possibilities, stimulating repertoires of XVI-XVII century literature to contemporary music, a wide range of sounds. But I never wanted to mythologize my instrument. I do listen to accordion performers with attention and interest, yes, perhaps with greater intensity in limited periods, but most of all I prefer understanding all instruments, timbre differences, executive possibilities, plurality of repertoires.  I consider accordion a wonderful sounds oppportunity to express myself with skill and I’m happy about it; at the same time, I feel the need to wonder elsewhere... playing more instruments in different ways is like feeding myself and it is useful to understand the different executive practices for composing.

It seems more and more difficult to be a musician nowadays. What is your impression?

We can give a wellknown answers, but I’d go even further. In this historical phase, many things have finally become transparent: function of art has been clarified once and for all aloud, that is, NOTHING, zero, this is the value that has been recognized to it, and that in the name of security. That means making empty theatre, places of cultural reflection, cities streets, while appropriate alternatives could be identified. Not even in May 1945, during the Red Army bombing of the German capital, the Berlin Philharmonic Orchestra didn't interrupt its performance of Ludwig Van Beethoven’s Symphony No.5 which it was performing in the Radio Hall of the capital. It is quite difficult to recognize the reason to be a musician nowadays...an oligopolistic market that monetizes every life moments and dictates the rules of survival, not towards merit, but towards productivity, towards noise, towards a sterility of content and styles. Money enslaved us. We live a gallop in unstoppable acceleration, with a dominant cultural industry and controlled mass media. I can say that precisely for this reason I have the desire to make ART more than before, to react to what is happening. Looking to the past, in etymology we find the meaning of the word “art” as “Tekhnè” from the ancient Greek (τεχνη), that means manual and artisanal skill that also implies creation as innovation, the beauty's sake. Just consider the Italian Renaissance... Therefore, a deontological reflection (who we are, what shall we do today) would not be out of place. Culture exist in order to stay together, it represents a fundamental aggregative function and we cannot miss that.And concerning “online concerts”, it is no sense, playing can’t exist without looks, smiles, applause, breaths, bodies and comments of people. Somebody says that we have to "go back to the cellars"for starting creating again, and I add "go back to the streets to play" is more better, so to feel alive and relate with people.